During Delano Davis’ adolescent years, he lived at the Arkansas Baptist Children’s Home. Delano was given a chance on life, while at ABC Homes, whereas he was in an environment filled with love and hope.  Because of the foundations he was provided while at Baptist Home for Children, Delano became passionate about giving other orphans the same opportunities he had been afforded as a child.

With this passion for giving back to others and keeping God first in his life, Delano decided to start a ministry. He founded Stepping Stones Ministries to help churches and other faith-based organizations raise funding for their organization and community programs, and within this Stepping Stones Ministries Delano started a project dedicated to raise funding for the Arkansas Baptist Children’s Home! 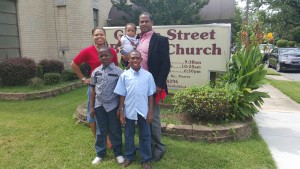